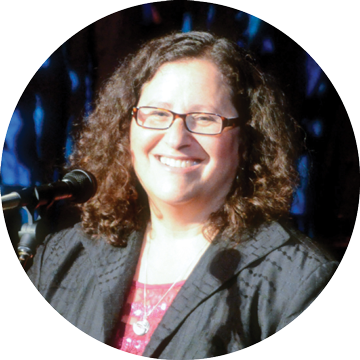 Lori is the founding Artistic Director of the Grand Rapids Women’s Chorus and has served in that role since its founding in 1996. Passionate about expanding the depth of repertoire for women’s voices, she has collaborated with the Grand Rapids Women’s Chorus (GRWC) to commission and perform nine original works by women composers. Her advocacy was recognized in 2006 when she was honored with a YWCA TRIBUTE! Award in the Performing Arts category.

Since June of 2013, Lori is the Executive and Artistic Director of the Girls Choral Academy where she works to “Give Girls a Voice”, providing girls throughout West Michigan an opportunity to build confidence and community through choral music.
As an arranger, Lori published Iraqi Peace Song, a traditional Iraqi lullaby written by Knut Reiersrud and premiered by the GRWC in 2007.

Lori received her Bachelor of Arts degree in Music from Aquinas College and is a member of the American Choral Directors’ Association, Michigan School Vocal Music Association and Chorus America.

Brenda has been with the Grand Rapids Women’s Chorus since 2005. In addition to doing some directing, she is a soloist with the chorus, leads vocal warm-up exercises on a regular basis, and occasionally accompanies.

Brenda studied music at the University of Wisconsin while majoring in Behavioral Disabilities, and completed a degree in Vocal Performance at Aquinas College after moving from Madison, Wisconsin to Grand Rapids. She was accepted into a master’s program in Voice at Western Michigan University where she studied with Marion Pratnicki and received vocal training that she considers invaluable. Under Ms. Pratnicki’s teaching, Brenda won the coveted National Association of Teachers of Singing award for the state of Michigan in 1988. Leaving her dreams of a vocal performance career behind due to family responsibilities, she earned a Master’s Degree in the Art of Teaching Music and sought a position in music education.

Brenda was a middle school music educator for the past twenty four years, teaching general music classes and directing the 7th and 8th grade choirs in the Forest Hills Northern Public Schools. Prior to teaching in the public schools, Brenda was on the voice faculty at Aquinas College where she directed three vocal ensembles and taught conducting and voice. She also spent 40 years in church music ministry, working with singers of all ages. 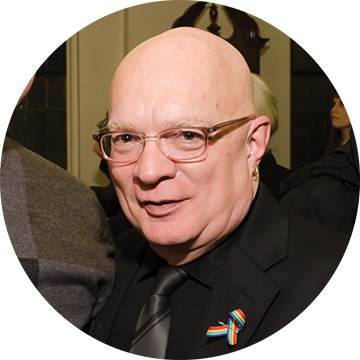 Philip W. Pletcher, conductor, pianist, actor and composer, has been active in music since age four and has played throughout the United States and Canada. He is a soloist and collaborative musician and is the pianist for Grand Rapids Women’s Chorus. Formerly, he served as pianist and conductor for the West Michigan Gay Men’s Chorus. He maintains a private teaching studio and has been a Production Pianist for Opera Grand Rapids.

Phil performs with William and Hollis Bokhout in the piano/vocal trio colla voce, has served as the Director of Music at Plymouth United Church of Christ, at First (Park) Congregational United Church of Christ and at St. Cecilia Music Society. Formerly, he was on the accompanying staff at Calvin College and Grand Valley State University. His arrangements for multiple pianos have been performed across the U.S.

He hosted the weekly radio show “Guest Conductor” for four years on WFGR 98.7 FM, the former Grand Rapids classical station, and is a past president of the Grand Rapids Piano Teachers’ Forum.

Mr. Pletcher received his bachelor’s degree in piano performance from Bethel College in consortium with Indiana University. His graduate study was at Michigan State University under Ralph Votapek. He has served on the board of directors of the Grand Rapids Bach Festival and on the Advisory Council for the Calvin College Artist Series. He is also past President of the Michigan Music Association.